Improved Production has been adopted by CAMS as a sporting-level touring car category. CAMS is ultimately responsible for the approval of the regulations or changes thereto, and responsible for publishing the regulations via the CAMS Manual and associated Bulletins as necessary. The Improved Production Racing Association of Australia (IPRA) is recognised by CAMS as the sole entity representing competitors in this category. The IPRA is the category representative group which is made up of a representative from each of the CAMS and IPRA-affiliated Improved Production state associations.

The IPRA is recognised by CAMS as the sole entity which may make recommendations regarding maintenance of and/or proposed changes to technical regulations for this category and/or sporting regulations for the conduct of competition activity for such vehicles.

CAMS will consult with the IPRA exclusively regarding the maintenance and/or proposed changes to the technical and sporting regulations.

The IPRA will be responsible for consultation processes within its membership and with other interested parties as may be appropriate from time to time.

CAMS offers a range of licences across all discipline areas starting at entry level through to international. To access any of the listed forms, refer to the forms list at the bottom of this page.

Level 1 Licences are one-day only licences that may purchased at Club events for people that want to participate for the first time.  A level 1 licence is for a single event only and for use at only one event per year.  It is only valid for social and non-competitive participation.

A L2NS licence entitles the competitor to compete in events such as observed section trials, touring assemblies, non-timed road events, motorkhanas, khanacross and drifting events, up to International level.

A L2S licence entitles the holder to compete in L2NS events plus regularity trials up to National Championship level, single and multi-car speed events (not racing) up to International level, and touring road events that do not run over closed road sections.

National licences are discipline specific – Race, Speed, Rally / Road, Off Road & Auto Test. Each type has individual requirements specific to each discipline’s licence. Holding a licence at national level in one discipline does not entitle to you compete in another discipline.

The FIA licence is required to compete in International events. Again discipline specific, the licences have additional requirements to national licences. In accordance with FIA Regulations, these licences expire on the 31st of December every year.

Competitor licences are for competition vehicle owners who are not the holders of a driver/navigator licence.

Competitor licences may be issued to:

The name on the CAMS Competitor Licence must correspond to the name in the log book of the relevant vehicle. Applications for Competitor Licences must where relevant submit evidence of incorporation and provide a ACN/ABN or registration of business name at the time of application.

In order to score points for the Club Championship, competitors must be paid up competition members of the VIC IPRA Inc for 2012. No competitor shall be eligible to score points from any round commencing prior to his/her being accepted as a member of the Club. The IPRA (Vic) membership officer shall be the final arbiter in regards to the time a person was accepted for membership of the Club

Both National and supplementary state rules pertaining to the IPRA must be adhered to at all times. For the avoidance of doubt, the CAMS Group 3J regulations current as at the time of the commencement of scrutiny for the meeting shall apply to each car entered for that event regardless of whether the event is run under CAMS or AASA sanction.

The IPRA Vic Inc 2012 Committee will administer the series

The series will be conducted as per the standing regulation; promoter regulations, further regulations, supplementary regulations and all instructions pertaining to each round issued by the organizers and CAMS ltd/AASA (dependant on sanctioning body for the event).

Points shall be awarded for both Outright and Classes on the following basis:
(4 race weekends indicated with a * have been rounded up to prevent decimal placed points being awarded)

In the event of a round having more than 4 races the IPRA Vic Committee will determine points based on the maximum of 120 points being available for a weekend. This may include, but is not limited to, classifying a race as non-scoring or altering the applicable points awarded, as advised.

Entries for Island Magic at Phillip Island are now open and spots are already filling fast - 19 IPRA Vic cars in the first hour.Go to www.motorsport.org.au to enter. ... See MoreSee Less

Motorsport Australia is a not-for-profit member-based organisation focused on the development, regulation and administration of motorsport across Australia.
View on Facebook
· Share

Let's go racing. Entries for Island Magic open Friday, October 15 at 7pm on the Motorsport Australia Event Entry website.At this stage, the November 26-28 event will be limited to 250 cars across the nine categories. No word yet on State Government or event organiser vaccine requirements, but we will keep you up to date as that information is finalised.www.motorsport.org.au ... See MoreSee Less

Motorsport Australia is a not-for-profit member-based organisation focused on the development, regulation and administration of motorsport across Australia.
View on Facebook
· Share 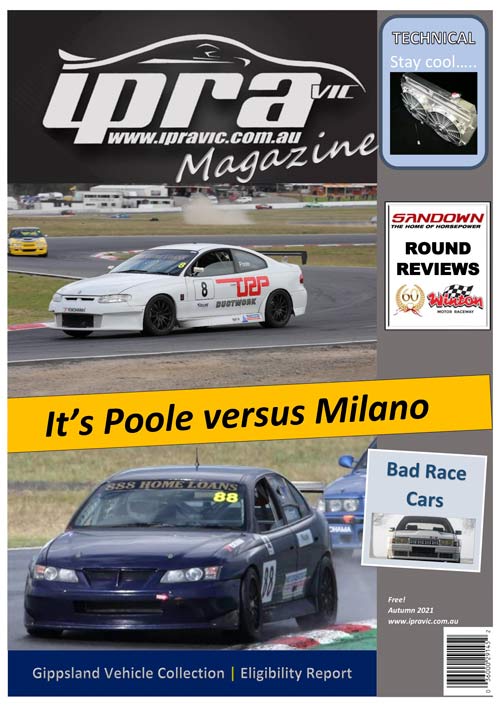